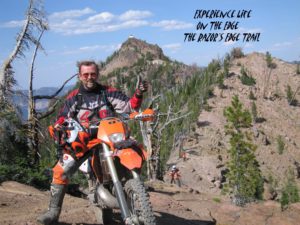 I want to thank my Son-In-Law Matt McCoy for setting up this web page for me. I will be adding more information as I get the site figured out myself.

I have 2 product categories currently. I sell motorcycle oriented mountain trail maps for the southern half of Idaho. I also sell fork mounted chain saw racks for all KTMs from 2000 to 2020, plus all KTM/Husabergs, KTM/Husqvarnas, and some Shercos.

My maps are designed to be rider friendly and the unique thing about my maps is I rate single track trails for difficulty on a 4 step scale, “Easiest”, More Difficult”, Most Difficult, and “Gnarly Trail” so you will have an idea what you are getting into. Keep in mind my ratings are based upon Idaho standards, and what I label are “More Difficult” may be what is called “Most Difficult” in other areas. The maps use USGS topographical maps as the base, and then roads and trails are added that are all color coded for route type, Single Track Motorcycle Trail, ATV Trail, Jeep Road, Main Road, and Non-Motorized Trail. They are printed on special 13″ x 19″ plastic foldable and weather resistant map paper. I currently have 6 double sided map sheets, with a different adjacent area on each side available, but new areas are under development now as well. I am also adding more jeep road suitable for Dual Sports, Adventure Bikes, ATVs and Side by Sides, where I focused on roads accessing single track in the past. 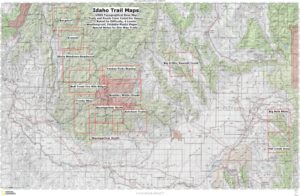 Minimize the handling affects by keeping the rack as tight to the forks as possible
Make it quick and easy to mount/dismount the saw yet hold the saw securely.
Mount it securely to the bike using existing bolt holes on the triple clamps
Make it strong, using 1/4″ aluminum plate
Make it work with most chain saws up to 28″ bars, although 14-18″ recommended
Pad the saw with 1/4″ rubber pads
Use Natural Rubber Heavy Duty Bungee Cords, bolted on one end to the rack
Use all Stainless Steel or KTM OEM mounting hardware. 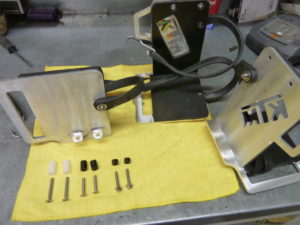 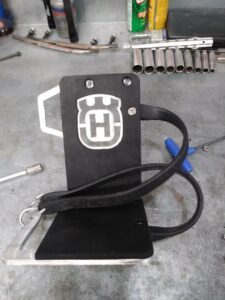 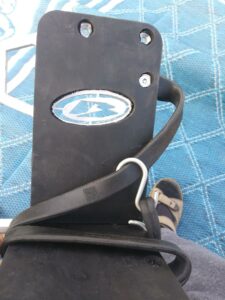 For those of you who don’t know me, I have been a hard core rider since the early 70’s and OHV Land Use activist since the early 80’s I raced in AMA District 36 for many years, and won a Desert Racing Association of Northern Nevada Veteran A Championship, a couple of D-36 Veteran “A” Class Championships in the mid eighties, plus a “Hi Point Golden State California Veteran A Championship. I was a co-founder of the High Sierra Motorcycle Club and Event Chairman for several AMA National Reliability Enduros, AMA National Hare & Hounds, and a North American Hillclimb Association National event. I also co-founded Western Snowmobile Racing in the 90’s and co-promoted over 25 SnoCross and Cross Country races in the Sierras around Tahoe where I lived for 25 years.

I worked for AMA District 36 as the first full-time AMA District Legislative Action Officer in the country in 1988 through 2002, were we were able to protect almost every event from environmentalist challenges. I initiated and co-led an effort to overturn the California Air Resources Board (ARB) ban on 2-strokes and 4-stroke races bikes in the late 90s, and got ARB to create the “Red Sticker” program that allows use of formerly banned bikes whenever an area in in compliance with air quality standards.

In 2002 I was hired by the BlueRibbon Coalition as their Public Lands Director and I moved to Pocatello Idaho. My club had been vacationing every year in Idaho since 1991 after I organized a club trip to Idaho, and I was looking for a way to move to Idaho because they have more mountain single track than anywhere else in the country, so I accepted the job offer from BlueRibbon, where I would work on national as well as local OHV issues. In 2004, I was promoted to the Executive Director position of BlueRibbon, but later that year I accepted a job offer from the Off-Road Business Association (ORBA) as their Director of Land use, and I worked for ORBA from 2004 through 2009. Unfortunately, the Economic Crisis decimated the OHV industry and almost half of OHV dealers went under, and ORBA was gutted from 9 staff members down to an Executive Director and one part time office worker.

In 2009, I was offered a job as the Nevada Projects Coordinator with the Great Basin Institute (GBI). GBI started as a field studies program for graduate students in the resource fields that is affiliated with the University of Nevada Reno, but it has grown tremendously with partnerships with state and federal land managers in Nevada and adjacent states. GBI does a wide range of Cooperative Management projects, including OHV Management on BLM Lands. GBI had secured federal Recreational Trails Program (RTP) to implement OHV management plans with 2 Idaho BLM offices, the Owyhee office managing the desert south of Boise, and the Challis office in central Idaho. Over the next 4 years I installed over 2,500 road and trail signs, built information kiosks, and supervised 10 man Nevada Conservation Corps hand crews that built motorcycle trails, maintained desert single track trails knocking down whoops with hand tools, and restoring closed areas. My favorite projects were laying out and supervising construction of a motorcycle trail around private property, where a new owner had locked the access to the trail and closed an 11 mile trail to Railroad Ridge at 10,900′. I had advocated for this trail while I was at BRC and ORBA and the BLM had authorized it in their Travel Plan Unfortunately, grant policy changes ended the Idaho projects. I worked in OHV sales for a few years before retiring last year. I still do some OHV land use consulting for Idaho and Nevada OHV groups, and I am working on more maps and saw racks for more models currently.

During all this, I have always been a hard core trail rider/explorer. I love searching out old trails and making them rideable again, like the Downie River Trail and Big Boulder Mine Trail near Downieville, CA. When I moved to Idaho, I found that there are a lot of old overgrown trails there too, out of over 10,000 miles of single track trails. I recently moved to Klamath Falls OR for family reasons, and we are organizing a new club and working with a major timber land owner to develop trails, along with talking to the Forest Service and BLM, but that is a very long term process that won’t be easy.Welcome to my site!